The Royal College of Physicians

On a crisp Autumn day, next to leafy Regent's park, we visited the Royal College of Physicians, which stands out like a physician in a white overcoat.

The Royal College of Physicians, which was founded in 1518 made a bold leap when choosing the daring Denys Lasdun to design their building. They interviewed him in their former headquarters in Trafalgar Square, of which pieces including portraits and books can now be found in the younger building. They didn't want an mish-mash classicism, they wanted something fit for purpose, modern, and most importantly, daring.

As we entered, there was a conference going on downstairs, but none of the hustle and bustle took away any of the feeling that we were entering an important place. The undulating brick side of the lecture theatre guides you into a spacious modernist portico which then reduces to the intimate scale of an entrance lobby before expanding again into the light-filled triple-height hall at the heart of the building. From here you can reach all the essential organs of the building with the help of a central stair artery. This stair case can easily be used during ceremonial functions, but more often makes a quiet display out of everyday movements. 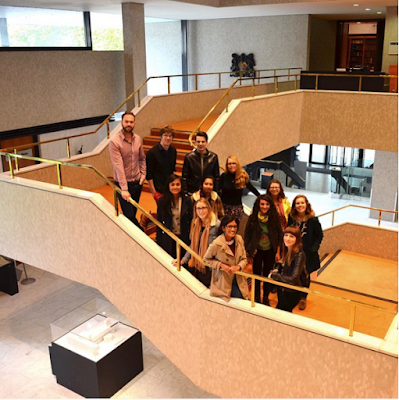 One of the walls of the hall is mostly of glass, opening up to a medicinal garden and the Regency terraces beyond. It seems Lasdun seemed quite indifferent to Regent's park as there is no view of it, resulting in feeling you are in a safe, secluded place. 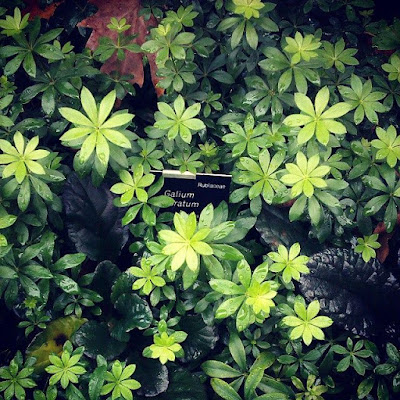 The Regent's park area was heavily bombed in the Second World War and was slightly neglected by the elite, and therefore not a very grand place to be, with probably not many trees. Lasdun thus had the challenge of creating a building that was respectful of its surroundings (buildings still standing), while at the same time commanding respect.  The choice of materials used played an important role in resolving this dilemma. The porcelain mosaic tiles that comprise the exterior walls were commissioned from a factory in Candolo, to perfectly match the stucco colour of the surrounding Crown Estates houses (they have since then been repainted, so no longer match). The dark blue brick of the lecture theatre and lower floors of the RCP conjures about images of the double-pitched roofs of the surrounding 1800s terrace houses.

The council chamber feels quite modern for it's time and a place from where the RCP would take over the world...actually, they were just about to launch the sad news that smoking kills - a very unpopular "new-age" campaign for the time indeed.

The library is set on several levels, with no views of the outside. A portrait of William Harvey, the first physician to completely discribe how blood circulates in the body, hangs here too. 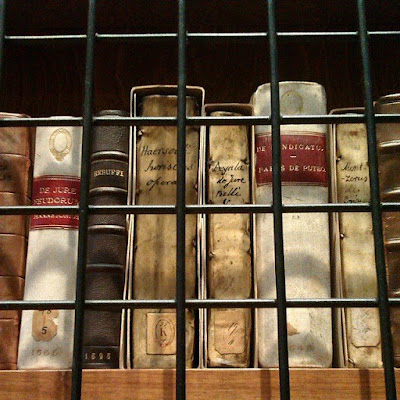 For Lasdun architecture was not just about abstract composition but about the human activities it contained. He did not see building as subservient to people, but ideally in a complementary relationship. He would amplify this idea in the National Theatre, which dramatises the movement of visitors through the foyers. The Royal College of Physicians, with its central stair and subtle modulations to its various uses, is an earlier but accomplished version.

For a more thorough description read "Anatomy of a building", by award-winning architecture critic Rowan Moore, whose notes made our trip even more enjoyable.

All photos by Wendy Leigh Mathie

Our tour of this vast masterplan of buildings focused on the external network of spaces that create the Barbican Centre and Housing Estate. Construction started in the 1970s and the buildings in British Brutalist style were designed by Architects Chamberlain, Powell and Bon. Our tour began in the housing estate where without a guide we would certainly be lost. Beautifully brick paved streets curve around the heavy concrete sky walkways to aid the visitor in their wayfinding. The guide points out the semi-circle motif that playfully appears in many moments across the Barbican complex - as windows, as vaults, as paving patterns - see if you can spot them on your next visit. Concrete is the big player at the Barbican - hidden away in a services plant room we found panels of test insitu concrete, where different finishes were explored. The final decision was for all the cast insitu concrete to be hand post-drilled to give a heavy mottled texture - its a crude finish but boy does it dazzle like glistening diamonds in the sunlight. The Barbican sits as a large chunk in the historical City of London - its towers loom over city workers, its edges sit strongly like the walls of a fortress - it is an important part of London's urban fabric and any visitor to the city should definitely lose themselves within its network. 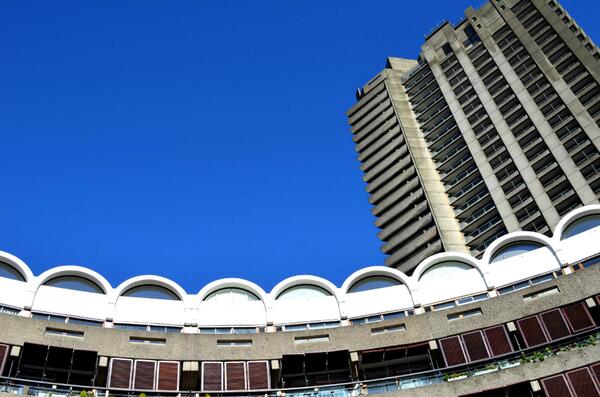 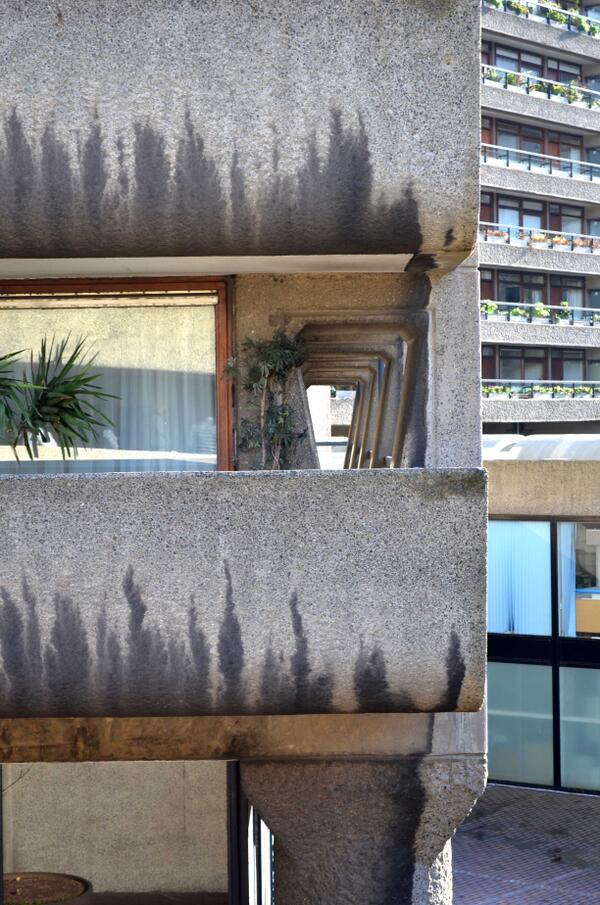 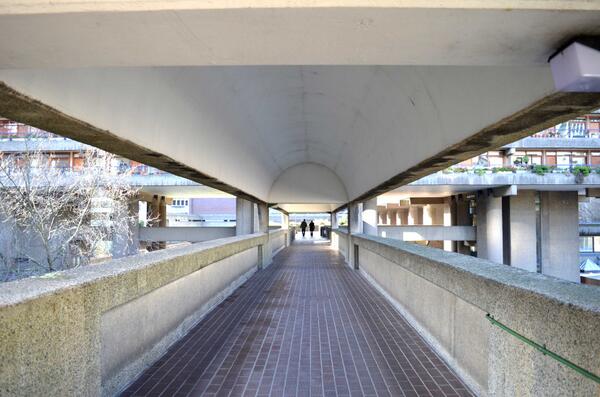 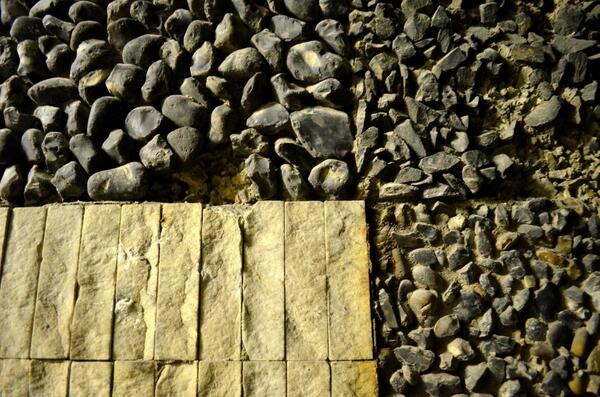 We visited Leighton House Museum in January 2014. This majestic building sits on a pretty residential street in leafy Kensington. The museum is the former home of the Victorian artist Lord Frederick Leighton and now displays artworks by Leighton and other pieces he collected.

Our tour started in the dazzling Arab Hall, quite unexpected as you enter through the simple red bricked Victorian facade that sits so politely on the street. Islamic tiles and gold leaf adorn the walls of this jewel of a space. A watery pool at the centre sits calmly underneath a golden dome. The Islamic interior was built by British artisans to Leighton's vision with materials that were imported. Looking up in the space are intriguing perforated screens to spaces beyond. You wonder who might be spying on this space for entertainment...

Our tour continued upstairs to the well lit artist studio where some of Leighton's collection of paintings hung. We were also lucky enough to be taken down into the basement to view the servant's quarters. Leighton's bedroom is one that we see so often when visiting the homes of historic artists/architects - a simple room with a single bed in much contrast to the elegance and affluence of the house that surrounds it.

The red brick facade is simple at the ground approach but rises proudly to be crowned with pretty brick castellation and hints of the golden dome poking up in the background. We very much enjoyed our insight into the home of a Victorian artist and the jewels that can be preserved in both the art collection and the architecture. 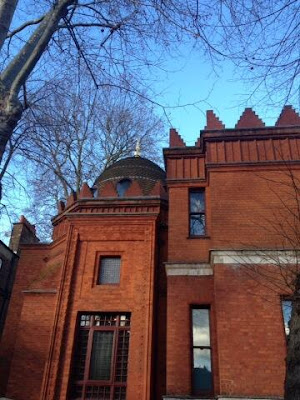 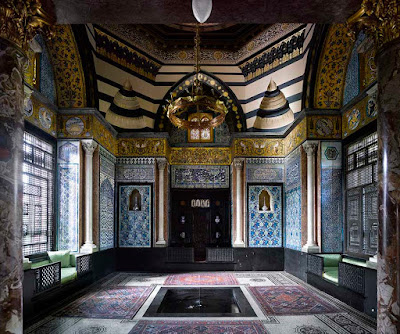 Photo credit for the Arab Hall: e-architect
Posted by The Salads at 09:09 1 comment:

On the last Saturday in November, we met on the steps of St Martin-in-the-Fields with flasks of mulled wine and boxes of mince pies to attend our first candle lit carol concert of the Christmas season. As the name suggests, the original medieval church stood in a large grassy area, but today the current 1720s James Gibbs design sits on the edge of the iconic Trafalgar Square where tourists loiter and take photographs, whatever the season.

We pushed and shoved underneath the tower gallery and up the stairs warm up and find our seats. From the oak gallery where we could see down into the nave and across into the chancel where the choir where warming up. The beautiful interior, noted for it's plasterwork and vaulted ceiling, was restored in 2008 by Eric Parry Architects. The new eastern window, by artist Shirazeh Houshiary and Pip Horne, is perhaps the most iconic permanent installation inside the newly refurbished church.

At first Gibbs's design was quite controversial, but it soon became the model for many other churches, in particular in the British colonies in North America. The interior is noted for the beautiful plasterwork decoration on the barrel-vaulted ceiling, the work of Giovanni Battista Bagutti and Chrysostom Wilkins. Outside, take a close look at the beautiful church tower - clearly inspired by the steeples of Christopher Wren. But the star is really the monumental portico. Its pediment is supported by eight massive Corinthian columns. On either side of the church are two more columns, creating the impression of a portico that wraps itself around the church.

St. Martin-in-the-Fields is the official parish church of Buckingham Palace and St James's Palace; George I was even churchwarden here. You can see several references to this royal connection in and on the church: to the left of the main altar is the royal pew, and the royal coat of arms of the United Kingdom embellishes the ceiling.

There's usually little activity in crypts, but the crypt underneath St. Martin-the-Fields is quite different: there's a restaurant - the 'Café in the Crypt' - and a souvenir shop. The crypt, accessible from the north side, is also used to hold temporary exhibits of modern art. We enjoyed hot mulled wine and mince pies in the crypt during the carol service interval.

The beautiful choral music resonating through the voluminous church space put us in true Christmassy spirits. Candlelight threw shadows of the decorative splendour of this space making our visit especially unique to experience. 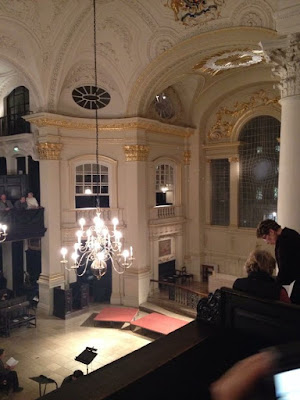 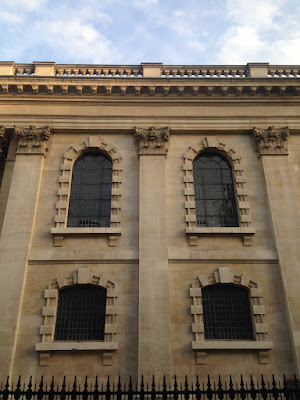 Not a room out of place in this composition of old and new parts. An 18th century silk mercer's house, a 1970s concrete framed office building are brought together with a new sunken gallery.  Whilst the 18th century interior ripples with mouldings, scalloped cornices and wood panelling, the extension is crisp, sharply detailed and unadorned. At Raven Row, white paint holds no prejudice and coats every surface, unifying old and new. Historical textures are re-rendered in a make up of plaster and white paint, occasionally interrupted by deeply blackened echoes of the past - the charred timber roof lights, or the interior of a used fireplace. The galleries are calm, spaces of a domestic scale, turning its back on the tawdry streets of Spitalfields just outside. 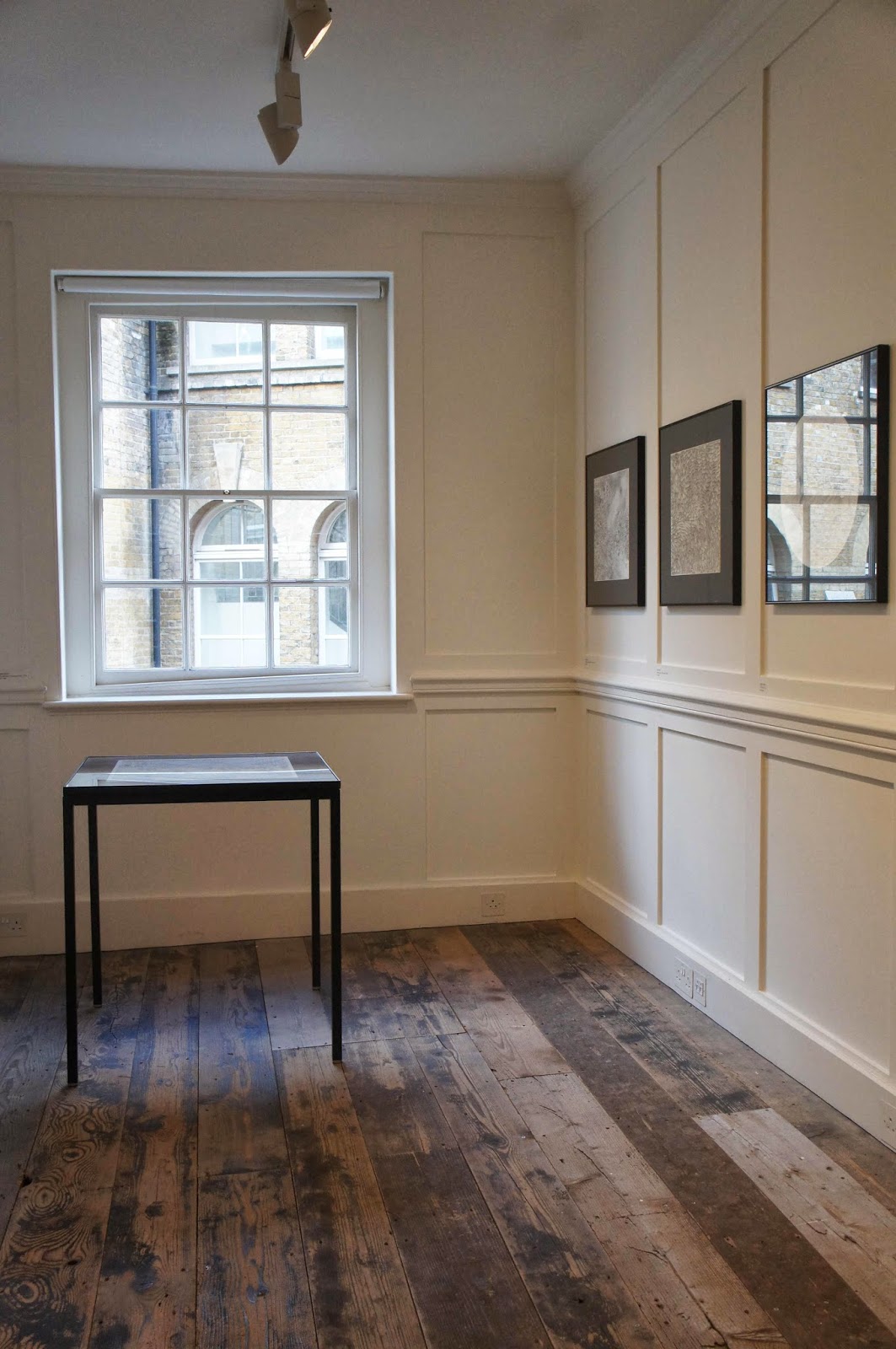 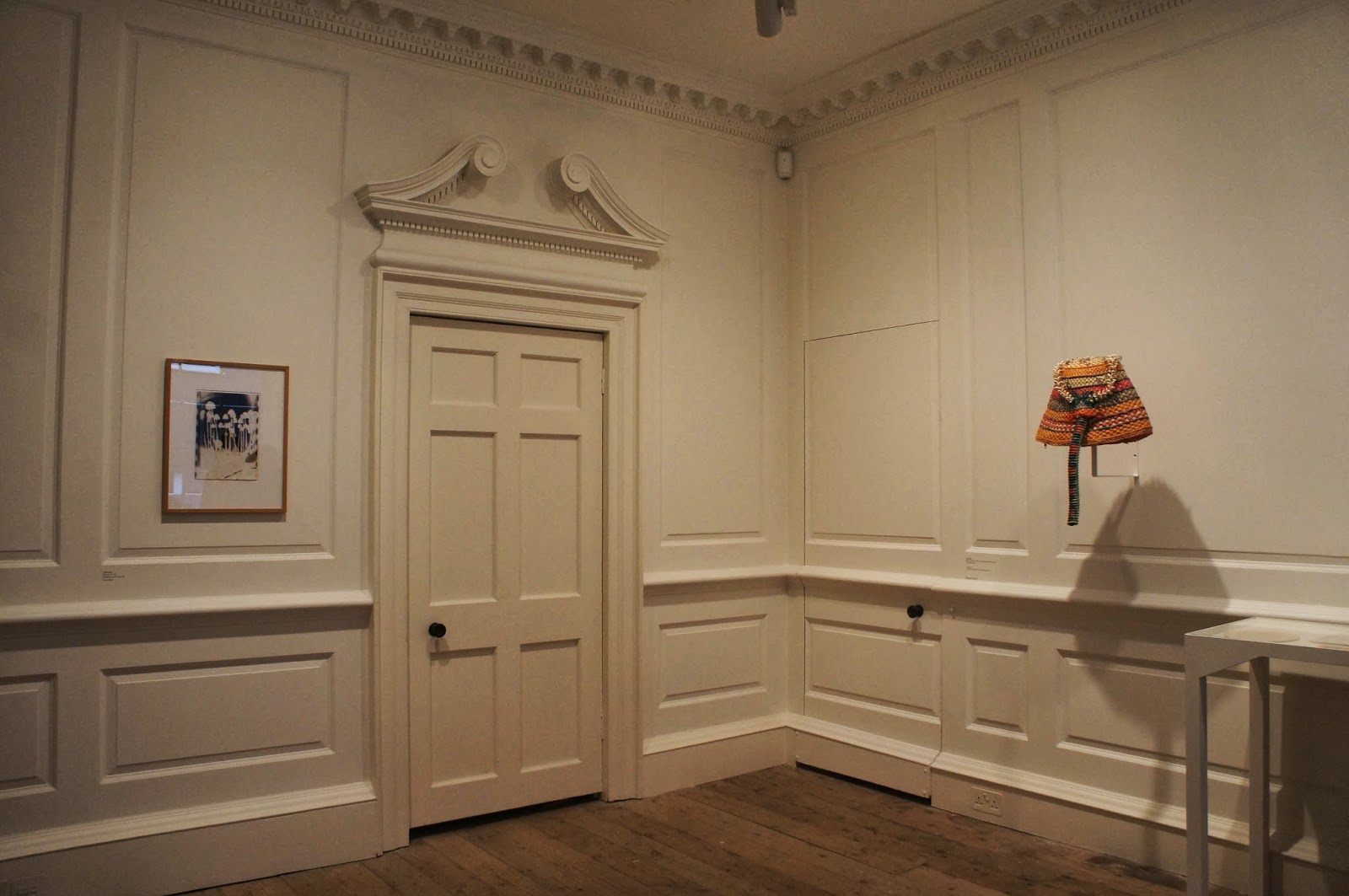 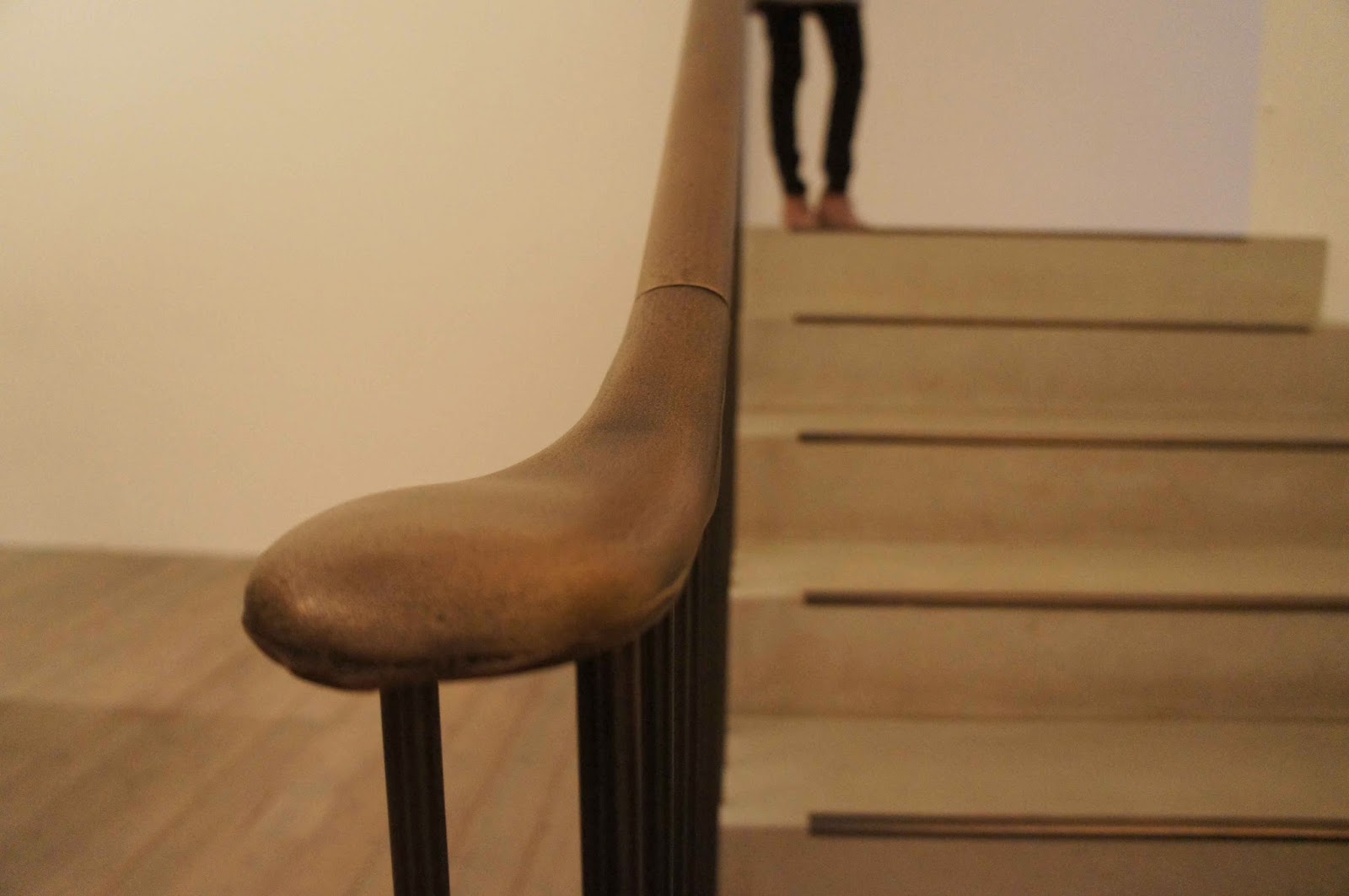 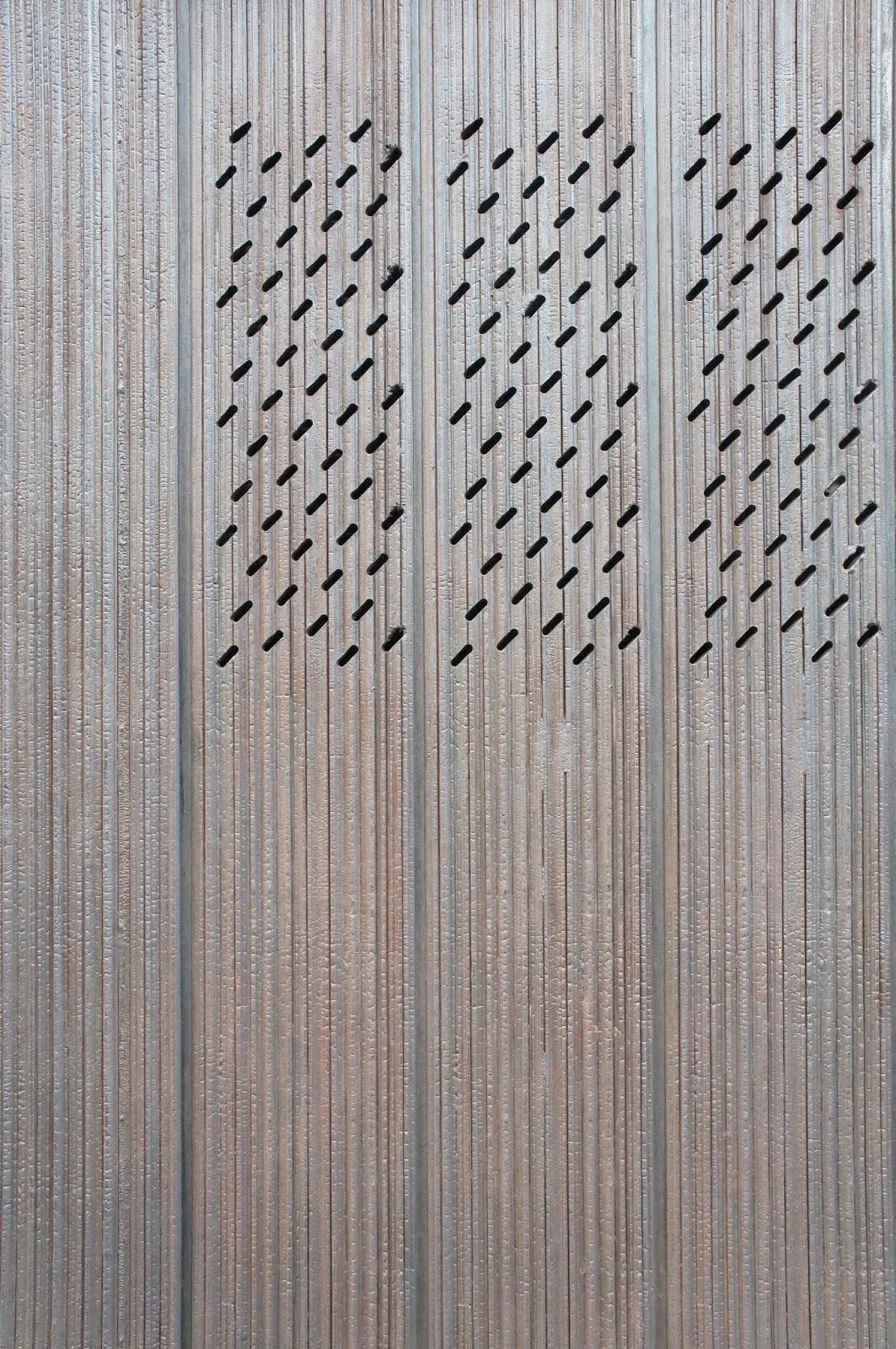 Red House or 'the beautifullest place on earth'

After negotiating the complexities of purchasing 5 split ticket extensions from London Bridge station the Salads were on their way to the far reaches of zone 5, to Bexley Heath. The destination for our first Salady outing was Red House, the home of the founder of the Arts & Crafts movement, William Morris. Completed in 1860 by his architect and collaborator Phillip Webb the Red house was intended to be a haven for cutting edge artists, auters and their muses of their day in the midst of the green fields of Kent (perhaps it was Victorian equivalent of Hackney Wick?). A tad unfortunately, the red house now finds itself nestled in the middle of classic suburbia. Within the context of the 1930s semi-ds and bungalows that surround it, Red house is certainly (as coined by Edward Byrne Jones) 'the beautifullest place on earth'. But in an unassuming, quirky, charming kind of way. Red house is a collection of attractive, well formed parts - the corbelled brick work, round arches, pointy turret roofs and assymetrical elevation. There is no hierarchy to how these bits come together, and the plan in general is quite free flowing, but works to intended effect. It feels like a collaborative piece of domestic architecture, embodying Morris socialist philosophy about craftsmen collaborating, using local materials to produce beautiful things.
http://www.nationaltrust.org.uk/red-house/ 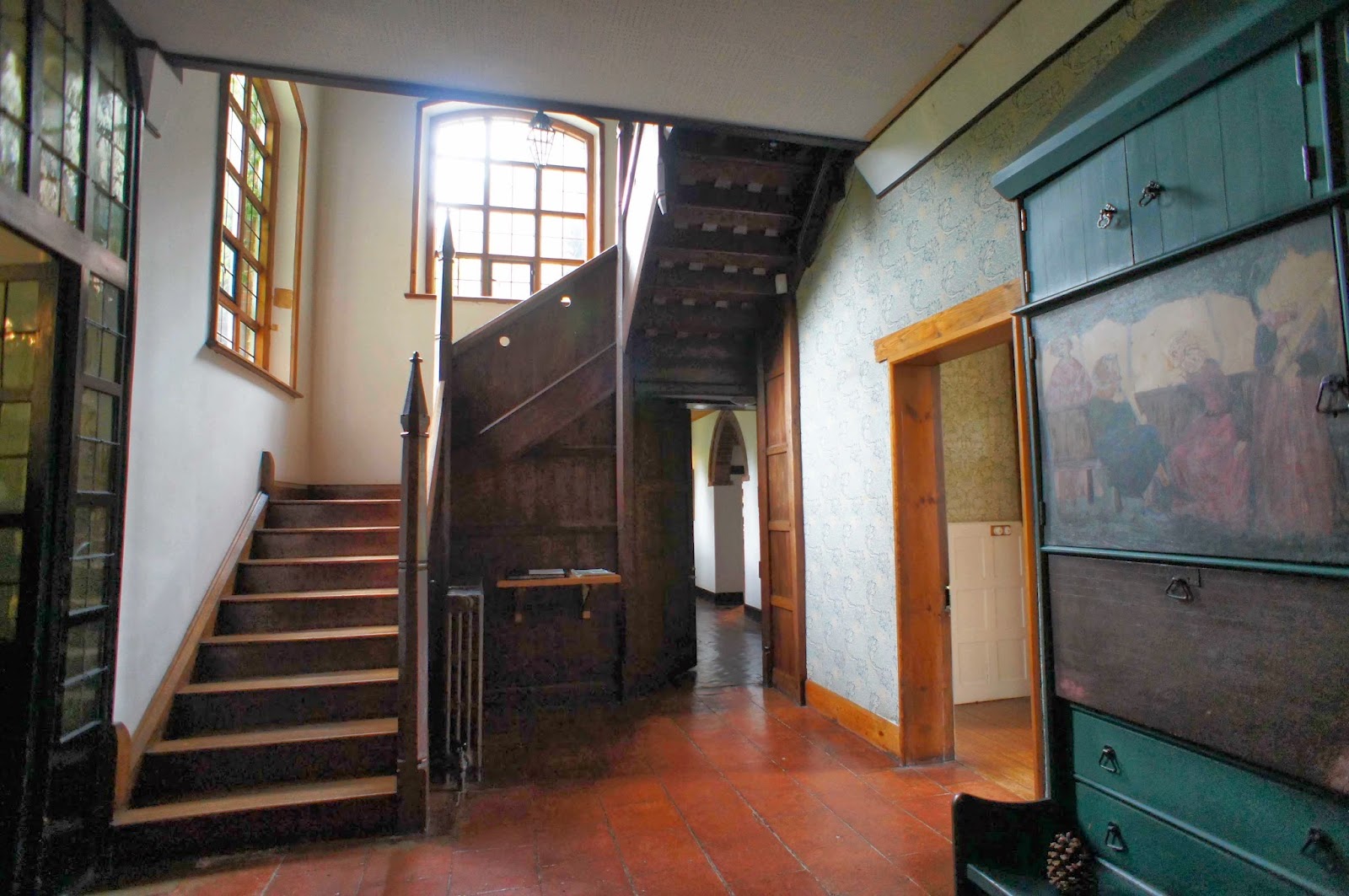